500 Years of Bookplates on Display at the Rosenbach

The posts on this blog bring attention to the interesting stories that provenance marks in historical books have to tell about books and their owners.  The current exhibit, “The Art of Ownership: Bookplates and Book Collectors from 1480 to the Present” at the Rosenbach Museum and Library presents 98 bookplates, each with a story to tell.  There are bookplates included in the show from across 500 years of history.  The hand colored bookplate shown in the image above is the earliest known printed bookplate in the western tradition, printed around the year 1480, which is affixed to a manuscript collection of sermons from c. 1408 (MS1174/14) .   The bookplate is the ownership mark of Hilprand Brandenburg of Biberach (1442-1514), who is identified in the inscription above it as having donated the book to the Carthusian monastery at Buxheim along with about 450 other volumes in 1506. The combination of the bookplate and the inscription by Buxheim librarian Jacob Louber appears, not just in this manuscript, but in others donated by Hilprand to Buxheim.

The motif of the angel holding a coat of arms in this very early bookplate indicates the way the owner presents himself according to his religious and social identity in the 15th century. In the 20th century Walt Disney’s bookplate reflects his identity as an artist and animated film maker:

The juxtaposition of ownership marks from such different eras not only tells us something about Hilprand Brandenburg of Bierach and Walt Disney as individuals, but suggests the way individuals have created their “brand” across time, conveying to the world the power, influence and values of that person in the larger spheres of business, social, or religious groups.  The Rosenbach show is thoughtfully designed to elicit such connections between the people who marked their ownership with these bookplates and their identities and activities in the larger world.  The show is divided into categories such as “Knights and Nobles,”or “Industrialists and Intellectuals.”  It also includes a few examples of bookplates being used for non-book objects, such as the scientist who placed his bookplate on his microscope case: 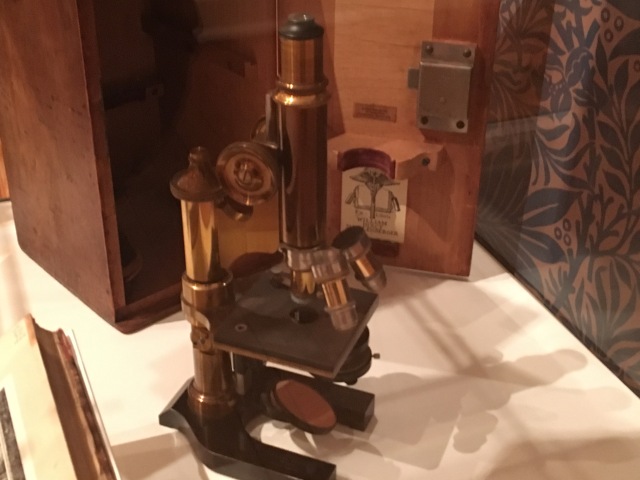 Other bookplates showcase the design work of amateurs who had an interest in and a knack for bookplate design, such as the son of the famous actress Ellen Terry, Edward Gordon Craig, who designed her striking bookplate and over 200 others:

The woodblocks and engraving plates used to make some of the bookplates are also on display at the Rosenbach, allowing visitors to see first hand the artistry and techniques involved in producing these marks of ownership: 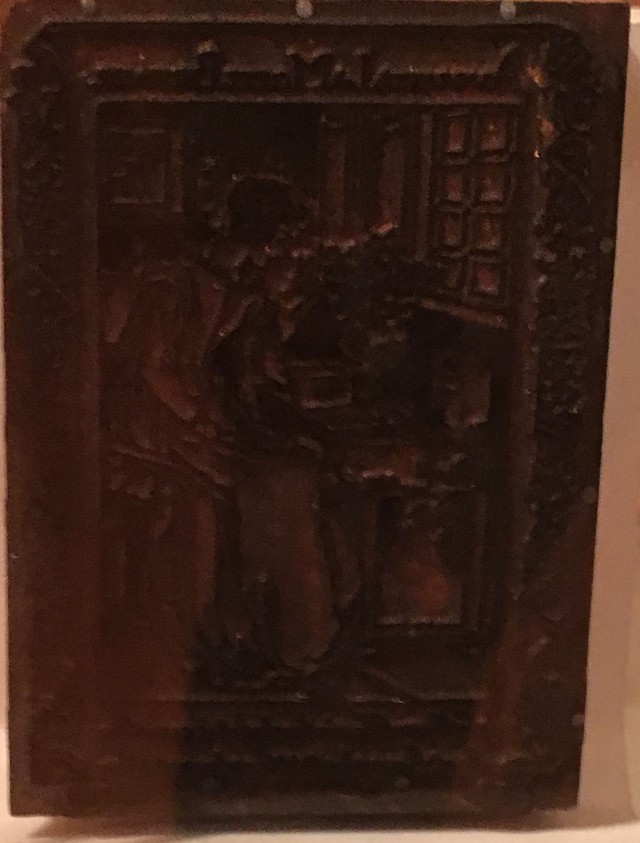 The woodblock shown above was made to print a bookplate depicting a woman in the act of collecting bookplates herself and expressing the joy of bookplate collecting: “Still am I busie bookplate’s [sic] assembling/ For to have plentie it is a pleasant thing.”

Of course, throughout the show are many examples that show different perspectives on the art of reading itself.  Bookplates point to the way readers think about the experience of entering the worlds that books create.  Sometimes fantastic and frightening:

Others depicting the pleasures of quietly reading at home:

“The Art of Ownership” brings together these and a wealth of other examples of how people have made their mark with bookplates.  I even found the bookplate of distant cousin, Frank Aydelotte, former head of Swarthmore College, among the bookplates on display: 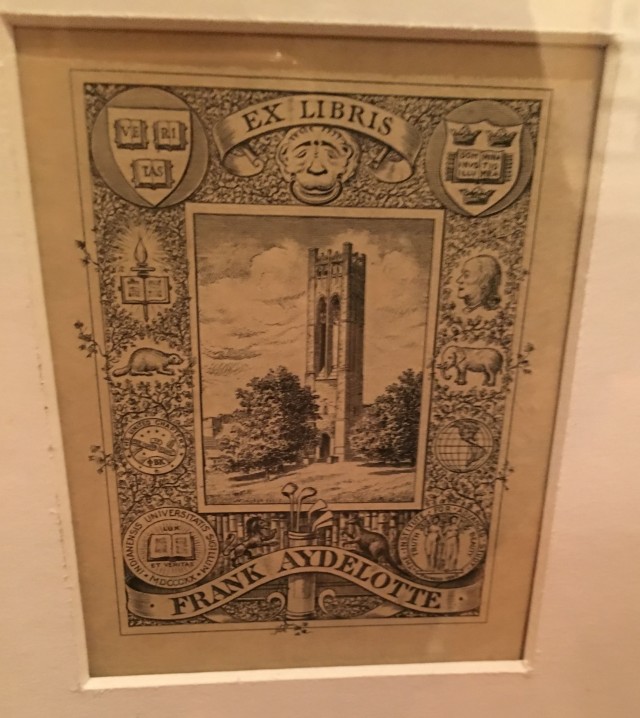 You can go explore and discover a wealth of wonderful bookplates now through March 19, 2017 at the Rosenbach Museum and Library in Philadelphia.  If you go, be sure to refer to the guidebooks (shown below) available to refer to during your visit, which provide excellent information about each bookplate on display:

In the coming weeks there will also be images of some of the bookplates in the show as well as other provenance marks from the Rosenbach’s incredible collection of books and manuscripts added to POP.  Look for updates on this blog!

This entry was posted in Uncategorized. Bookmark the permalink.