Mystery Monday: Who Was Anastasia Löwin? 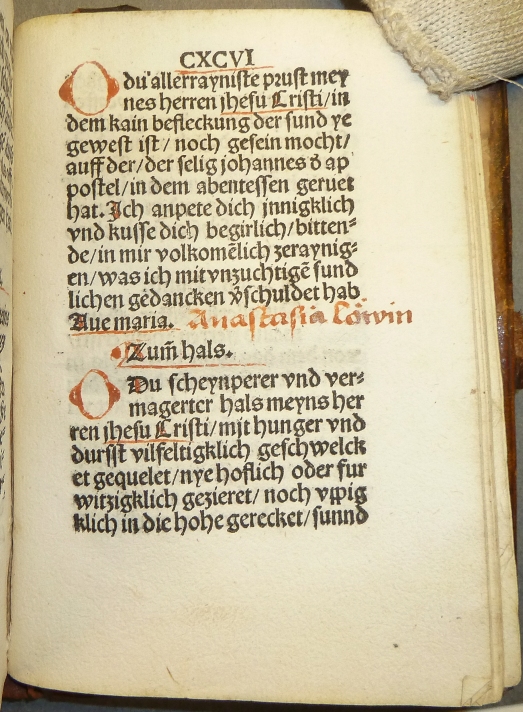 Like the old joke, the page shown above is black and white and red all over.  The main text, a series of prayers printed in black, has been adorned in scarlet.  There is red underlining to highlight important features like the chapter number, and red highlights have been added to certain important letters, such as the capital “C” in “Iesu Christi”, also underlined, on the second line of the page.  The large capital “O”s, which look a little like they are wearing earmuffs, have been added to the start of each of the prayers on the page, each of which invoke a particular body part of Jesus Christ for the reader to meditate on: O breast of Christ, O throat of Christ, etc.

Most notably two words in red have been added to the text.  There is no religious significance to the words, nor do they mark a significant header or division in the text as with the other red markings.  Instead, they spell out the name, Anastasia Löwin, presumably the former owner of the book.  Her name appears in red ink in at least four other places on the book:  on two other pages and, just barely visible, written across the pages on the tail edge of the book (see image below and to the right).  In other places it appears with the variant spelling Anastasia Laÿin.
The red added to this text comes out of a long tradition in medieval manuscripts called rubrication (meaning, to make red).  Often after the main text had been written with regular black or brown ink in a medieval manuscript, a  scribe known as a rubricator would go through and add red lettering, or sometimes just red underlining and other accents, to the text to bring attention to particularly important parts of that text.   Text rubricated might include especially important passages, or headings that signify where chapters or divisions in the text begin and end.  The practice of writing important days in red in manuscript versions of medieval calendars gave us the phrase “red letter day”, and the tradition of representing the words spoken by Christ in red co

ntinues to appear in many modern bibles.

The book in which Anastasia Löwin’s name is rubricated is not a manuscript, but a very early printed book from the year 1495 with the rubricated features added by hand.  Titled Herzmahner, (Penn Libraries Inc H-135), it was printed in Nuremburg, Germany.  It is a religious book, written by a Carthusian monk, containing various prayers and text for use in meditation and devotion, such as the series of passages each focused on a single part of Christ’s body that appear on the page above.  The book also includes features such as an imagined dialogue between Christ and His mother Mary which the reader was meant to use as the basis for meditation.

Books such as this one, printed in the first 50 years of printing from 1450-1500 are known as incunables.  Incunables, and other early printed books, are often especially interesting because of the ways in which manuscript practices continued to be a part of early printing practices.  For example, the font used for the black printed text of the pages of the Herzmahner  mimics the kind of lettering a scribe might have used to produce a manuscript version of the text, something clearly visible here where the hand-written red lettering uses a similar (though not identical) style.   For owners at the time, a printed book might be a more affordable alternative to the expense of having a scribe write out a full text (in this case, a rather lengthy text of several hundred pages), but they would still be interested in having the hand-written additions of the rubricator, both because the rubrications could be useful, but also because it was both a familiar format and one that would give a printed text the look of a manuscript in the same way that we today like to have virtual pages to turn on our ipads and tablets because the format is a familiar one that helps us navigate the texts we read.

We don’t know who Anastasia Löwin (or Layin) was or exactly how her name came to be rubricated in this text.  The last page on which the name appears is dated with the year 1502 (see image below), indicating that she likely owned the book in the early 16th century.

The binding of the book is likely original to this time, a stamped leather binding with the remains of a metal clasp, bearing unidentified initials, still attached.  The binding, along with the personalized rubrication indicates that Löwin would have been a wealthy woman who could afford a high quality printed book with all the trimmings, though not, perhaps, able to afford a fully manuscript version, or the luxury of illuminations.  It is not very typical to find the name of any owner rubricated in a book in this way, but especially unusual to have a woman’s name represented in such a noticeable way.

The book is also unusually small for a book printed in this period, a hand-held size similar to manuscripts of books of hours, and was probably meant to be carried about and used often.  Such portable devotional books were often seen as appropriate kind of text for women to use in daily prayer and meditation.  It is also written in German, which could make it more accessible for a well-to-do woman, who might have been sufficiently educated to read the vernacular, but may not have known Latin.

Whoever Anastasia Löwin was, holding her book today allows us to imagine some small parts of her life, perhaps early mornings in 16th century Germany when she might have taken the book from the shelf, where it would have been resting lying flat so that the red text with her name and what seems to be the title of the work (see image of tail edge above), could be easily read written on the edge of the pages.  She could then carry the book with her easily to chapel or to a place in her own room where she could unclasp it and quietly sit to read and do her devotions.  And her name, written prominently, impossible to miss, both in and outside the book, would mark for her, as well as for others, not only her ownership of the book, but the fact that she was someone of value, perhaps of importance.  Whether the name was ordered written by a husband for a cherished wife, or commissioned by Löwin herself, she is set apart from the names of all the many forgotten women of history by the fact that her name, at least, was writ in red.

Do you have any ideas about who Anastasia Löwin may have been?  Other interesting things to say about this book?  Visit the POP Flickr feed to see all images from this book and to make comments.

1 Response to Mystery Monday: Who Was Anastasia Löwin?