500 Years of Bookplates on Display at the Rosenbach 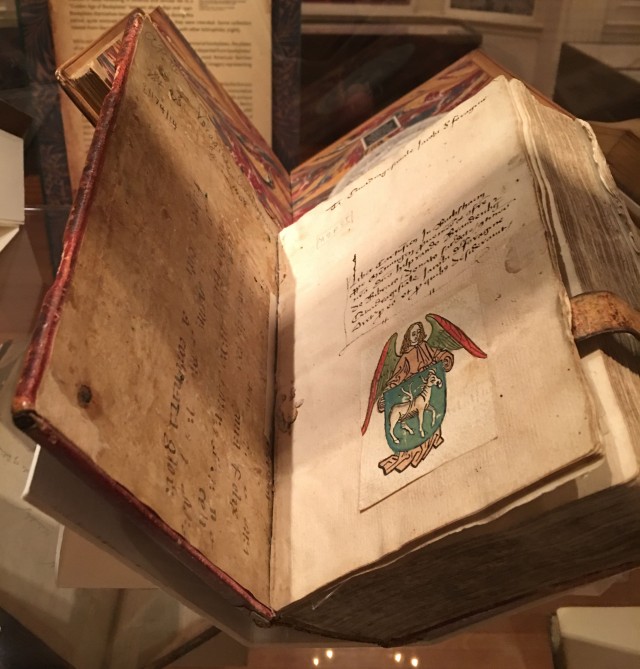 The posts on this blog bring attention to the interesting stories that provenance marks in historical books have to tell about books and their owners.  The current exhibit, “The Art of Ownership: Bookplates and Book Collectors from 1480 to the Present” at the Rosenbach Museum and Library presents 98 bookplates, each with a story to tell.  There are bookplates included in the show from across 500 years of history.  The hand colored bookplate shown in the image above is the earliest known printed bookplate in the western tradition, printed around the year 1480, which is affixed to a manuscript collection of sermons from c. 1408 (MS1174/14) .   The bookplate is the ownership mark of Hilprand Brandenburg of Biberach (1442-1514), who is identified in the inscription above it as having donated the book to the Carthusian monastery at Buxheim along with about 450 other volumes in 1506. The combination of the bookplate and the inscription by Buxheim librarian Jacob Louber appears, not just in this manuscript, but in others donated by Hilprand to Buxheim.

END_OF_DOCUMENT_TOKEN_TO_BE_REPLACED

Incunables at Bryn Mawr and Marge in the Margins

The image shown above is one of 134 new images of provenance marks from the Special Collections Library at Bryn Mawr College that were recently added to POP.  All the images show marks of ownership from Bryn Mawr’s collection of incunables, or books that were printed before the year 1501 in the first fifty years of printing in the west.  These books document printing from the time when it was a start-up technology about to change the number of copies of a text you could produce at one time and altering way people in the Renaissance period shared information just as the internet has revolutionized the sharing of information in our own time. They also are filled with over 500 years of evidence showing the marks of people who owned and read these books over the centuries, like the inscription written by “Marge” above in a 1498 Opera Medica (medical works) printed in Venice in 1498.

END_OF_DOCUMENT_TOKEN_TO_BE_REPLACED

Posted on September 26, 2016 by Laura Aydelotte 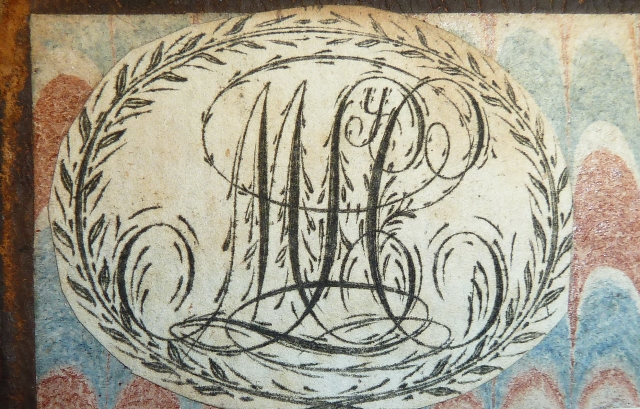 Today’s mystery provenance mark comes from a book called “Il Pastor Fido” the “Faithful Shephard”, a tragicomedy from the late 16th century (Penn Libraries: IC55 G9315 590p 1591).  The monogram bookplate shown above appears in the upper left corner of the inside front cover the book.  This bookplate is so ornately designed that at first the central letters may just seem an extension of the vine pattern wreathing the monogram.  Even when the large letters, “M” “L” and “C” become clear, one could easily miss the small “y” inserted near the top between the L and the C.  Who’s monogram is this, and why does the little “y” appear?

END_OF_DOCUMENT_TOKEN_TO_BE_REPLACED

Posted on September 20, 2016 by Laura Aydelotte

The image above shows the signature of Isaac Newton (1643-1727) in a copy of Robert Boyle’s Experimentorum novorum physico-mechanicorum at the Huntington Library in California (Huntington: 70087).  As Newton notes here under his name, the book was given to him by Boyle, nobilissimi Auctoris [the most noble author].  Mention Newton, and chances are that people will think of a man sitting under a tree waiting to be hit by an apple and discover gravity.  The apple story may be partly true.  Newton wasn’t conked in the head by an apple, but he did tell friends a story about how watching an apple fall from a tree started him questioning why objects consistently fall straight to the ground, which led to the research that resulted in the theory of gravity.   The story about the fall of an apple setting off the chain of thought that would lead to some of the most groundbreaking theories in scientific history  belies the complexity of Newton’s work, which was the result of many years of scholarly study and research.  At the same time, the story functions as a reminder of all the diverse factors that contribute to important discoveries: time spent deep in mathematical textbooks, experimenting in a lab, walking through a garden, or reading a book written by a fellow scientist like Boyle all play their role in forming innovative ideas. END_OF_DOCUMENT_TOKEN_TO_BE_REPLACED

Mystery Monday: A Manuscript Mona Lisa From the Huntington Library 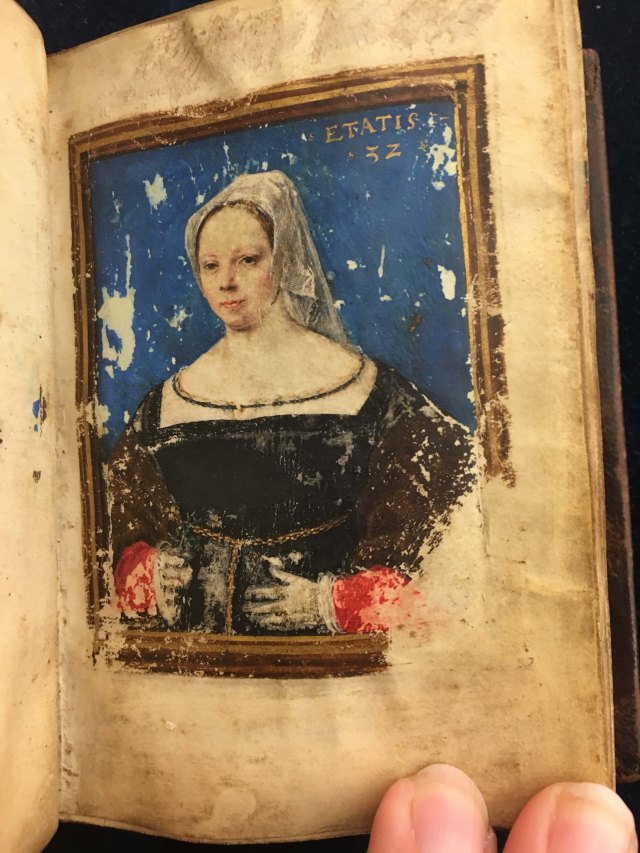 When most people think of Renaissance portraits they picture a painting like Leonardo Da Vinci’s Mona Lisa hanging in a frame on the wall of a museum.  We might expect to encounter the faces of people from the 15th and 16th staring at us from the walls of art galleries or the paneling of old family houses.  The portrait shown above sits in a frame, but a frame painted on the page of a book, not hung on wall.  Furthermore, it is a portrait from a book that fits easily into the palm of one’s hand:

END_OF_DOCUMENT_TOKEN_TO_BE_REPLACED 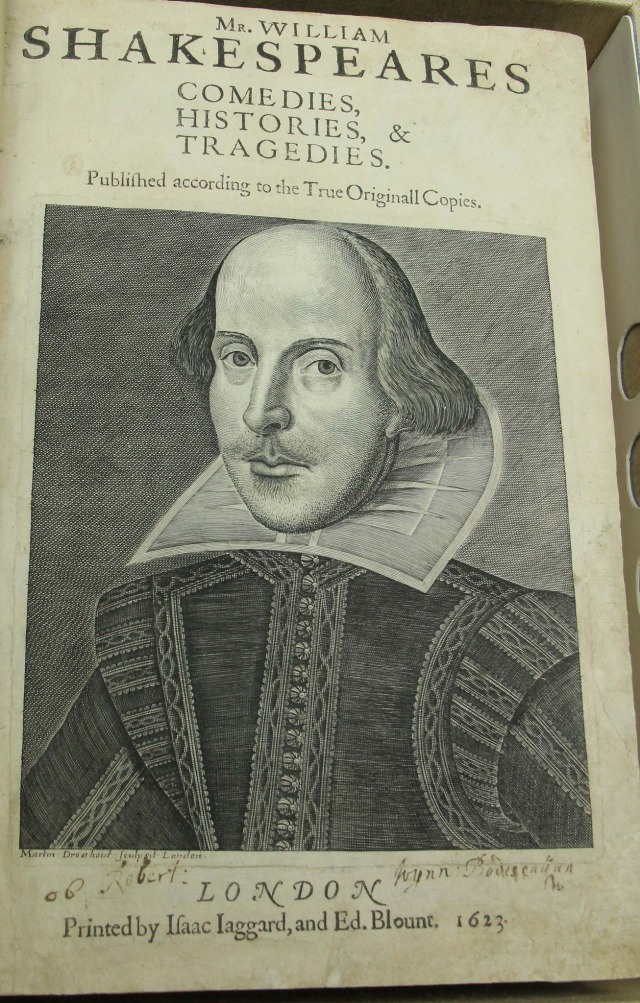 The inscription (shown larger at the top of this post) reads “Robert: Wynn: Bodescalian (or Bodescallan)”  but who Robert Wynn was, or what the word Bodescalian refers to remains unknown.  If you have ideas, post a comment to this blog or comment on the image of the inscription on the POP Flickr Feed.

We do know that the Newberry’s First Folio was owned by Louis H. Silver (1902-1963), a Chicago book collector who left a substantial part of his collection to the Newberry, and whose bookplate appears in the front of the book:

END_OF_DOCUMENT_TOKEN_TO_BE_REPLACED

Posted on November 3, 2015 by Laura Aydelotte

Often figuring out who owned a book before begins with researching the marks we can see on its pages.  However, in some cases the first challenge is to be able to see those marks at all.  As I wrote in a recent post, POP has recently begun including images of provenance marks from the Folger Shakespeare Library, including images from 8 of their 82 First Folios (more on the Folger First Folios coming up in a future guest post on the Folger’s blog, the Collation).  This made the POP team curious about the provenance in our First Folio at Penn Libraries (Folio PR2751 .A1).  There are some very faint traces just barely visible in some places in our copy of the book, but the pages had been washed by a previous owner, a process that left them looking, for the most part, pretty bare.    The few things that are visible still, like the inscription shown above, are very faint and hard to see.

POP assistant Ben Turnbull, Penn Post-Baccalaureate student in Classical Studies, recently applied his photoshop skills to making this and other marks in Penn’s First Folio easier to see.  Above is the same image now much easier to read.

END_OF_DOCUMENT_TOKEN_TO_BE_REPLACED

Posted on September 16, 2015 by Laura Aydelotte 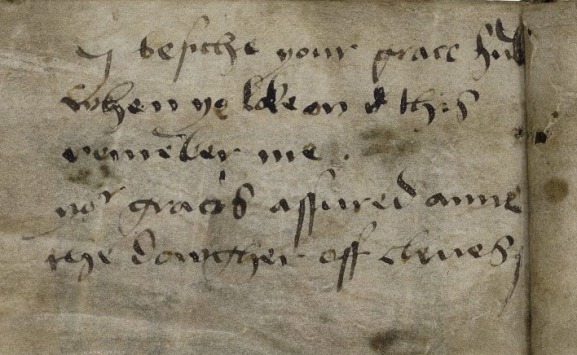 The inscription above is a note to Henry VIII from wife number four of six, Anne of Cleves.  Written in a 1533 book of hours from the Folger Shakespeare Library (STC 15982), it reads:

There is some irony to Anne’s request that Henry remember her when he looks on this book, since Henry divorced her because he claimed that he could not bear to look at her.  Indeed, while it’s uncertain whether he was truly as repulsed by her at first sight as later accounts suggested, certainly by the time the divorce was going through Thomas Cromwell (testifying in an unsuccessful attempt to keep from being beheaded for arranging the marriage) quoted the king as having said that he could never consumate his marriage to Anne because “if his grace would…go about to have a do with her, his highness verily thinks that his nature would not consent thereto.”   Anne’s marriage to Henry was the shortest of  his marriages, lasting only from January 1540-July 1540.  This was probably a blessing in disguise, given that she avoided the fate of beheading that befell his second and fifth wives and, in fact, outlived all his wives.

It has not been established when this note from Anne to Henry was penned, but it almost certainly presents evidence of a moment in history before the king had determined to sever his ties with her.  END_OF_DOCUMENT_TOKEN_TO_BE_REPLACED

Update: Thanks to Anita Weaver, who tweeted a link to the Ritman library, which had identified the owner associated with this bookplate.  It is the bookplate of René Philipon (1870-1936), and the greek “Philos Pontou” is a pun on Philipon’s name.

Today’s Mystery Monday post is an intriguing bookplate with an image of a unicorn swimming through ocean waves.  The Greek lettering above reads philos pontou (friend of the sea).  The name Joe Andrada, presumably the name of the engraver, and the year 1917 appear in the lower left-hand corner. 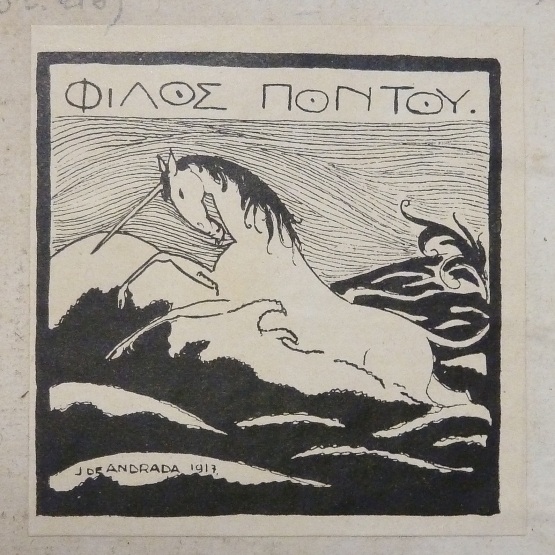 END_OF_DOCUMENT_TOKEN_TO_BE_REPLACED

People have long taken pleasure in adding some element of individual expression to the media they use to read.  This is apparent nearly everywhere on the computers and websites we use daily to access news, scholarship, social updates and more.  We customize our cover photos and profile pictures on sites like Facebook, adorn our laptop screens with “wallpaper, and choose artistic, blingy, or ironic covers to enclose our phones.  These are all not only statements intended to convey something about who we are to the people around us, but also serve as reminders to ourselves that we have something unique to contribute to the world every time we turn to read an online article or a text from a friend.  This universal desire to combine individual expression with the experience of reading and viewing material was the basis for a recen

t catchy MacBook ad in which a rapid succession of images shows the iconic apple logo on the case of a laptop adorned by various customized stickers, from hipster hats to Homer Simpson:   https://youtu.be/5SIgYp3XTMk  The ad is selling a product intended to act as a person’s gateway to the world’s information, and plays upon the concurrent need for the object offering that experience to give people an experience in common together, suggested by the apple logo that unites all MacBook owners as a group, while at the same time providing a distinctly personal experience, expressed by the imaginative stickers.